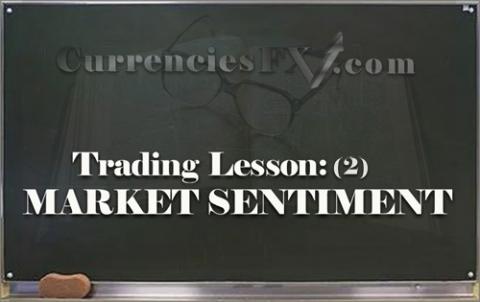 Market sentiment refers to the prevailing attitude of investors in a particular market.

■ Always Consider Whether Your Idea is Already Discounted by the Market

You must always consider whether the market has already discounted your trading idea. If your idea is based on news, consider that at least 90% of news is already incorporated in the prices.

Michael Marcus says that you must always ask yourself: "How many people are left to act on this particular idea? -You can evaluate that by using the classic momentum-type indicators and observing the market tone. How many days has the market been down or up in a row? What is the reading on the sentiment indexes?”

As mentioned before, trading is a zero-sum game where the great majority of traders lose money. Therefore, if you want to prove correct on a trade, make sure there are a lot of people who are going to be wrong.

As Bruce Kovner argues: “If you see that most of the members on your guru list are bullish at a time when the market is not moving up, and you have some fundamental reason to be bearish, you feel stronger about the short-trade. I like to know that there are a lot of people who are going to be wrong.”

Ray Dalio says: The average man tends to be much more reactive if you look at the purchases and sales that they make. When something goes up, they're more likely to buy it. They think, ah, that's a good investment. They don't know how to measure that in terms of, oh, is that a much more expensive investment that's more likely to go down?

-That's what they're attracted to. They tend to buy high and sell low, and so an average man should not be playing this game in that way”.

■ Be Contrarian to the Herd

-In order to be successful, you're betting against the consensus, and you have to be right.

-The biggest mistake that most people make is to judge what will be good by what has been good lately. So, if a market has gone up a lot, they think that’s a good market rather than it’s more expensive. And when it goes down a lot over the last few years, they think, ‘That’s a bad market, and I don’t want any of it'.”

Peter Lynch says: “You can beat the market by ignoring the herd.

The majority of traders are usually on the losing side. Therefore, when a lot of speculators publicly predict a major price breakout it will probably not happen. A technical pattern is more likely to confirm when it is less observed and less discussed by retail speculators.

Bruce Kovner argues: “The more a price pattern is observed by speculators, the more prone you are to have false signals. The more a market is the product of the non-speculative activity, the greater the significance of technical breakouts.”

Larry Hite argues: “Although I don't really trade off indicators, there are two indicators that come to mind:

■ Don't Focus on What the Market's Going to Do, Focus on your Own Action if it Gets There

The great majority of traders try to predict where the market is going using TA and open trade positions accordingly. However, the market is uncertain and unpredictable. That means that at least 50% of the time these traders will be wrong and they will be highly exposed to unfavorable market conditions.

The most efficient tactic to deal with uncertainty is to create different scenarios about where the market is going, and decide your action in each of these scenarios:

■ Have Strong Hands and be Contrarian to Weak Hands

Having strong hands is maybe the most important feature of a successful trader. You must open trade positions only for a very good reason. If there is not a critical change in the fundamental landscape, there is no point to close your positions if the market moves in the opposite direction.