Currency is a medium of exchange issued by a government body and is used as a method of payment. This form of money is generally accepted for the trading of goods and services. The Foreign Exchange market is a global decentralized (OTC) market for the trading of currencies.

Gold was the global currency since the dawn of time. The Athenian silver drachma, coined in the 5th century B.C. is probably the first currency that became widely accepted, outside its issuing state. After Alexander the Great's conquests (336 BC – 323 BC), the name drachma was used in many of the Hellenistic kingdoms in the Middle East. The Greek Drachma was followed by the Roman Gold Aureus and Silver Denarius. The Athenian Drachma and the Roman Denarius circulated simultaneously for some time. The dominance of Roman currency was brought to an end because of the extreme inflation during the early 4th century A.D.. As the Western Roman Empire was falling, the Byzantine currency (named Gold Solidus) became the dominant currency worldwide in the 6th century A.D., and afterward. The Islamic Dinar became the next global currency during the next couple of centuries, although the Solidus and Islamic Dinar continued to circulate simultaneously for some time.

By the 13th century, the Florence Fiorino became dominant in the Mediterranean, and by the 15th century the Venice Ducato. In the 17th and in the early 18th centuries, the dominant international currency was the Dutch Guilder issued by the Netherlands. In the 19th century and until World War 2 the British Pound Sterling became the world’s dominant currency. In early 1900, 60% of the total global trade was invoiced in British Sterling. After WW2, and ever since the US Dollar is the global dominant monetary unit.

The legendary hedge fund manager Ray Dalio offers an insight into the dynamics that he saw when studying the rises and declines of the last three reserve currency empires (the Dutch, the British, and the American) and the six other significant empires (Germany, France, Russia, India, Japan, and China) over the last 500 years.

Always according to Ray Dalio, the following 17 items are the main forces that drive the rises and declines of monetary empires: 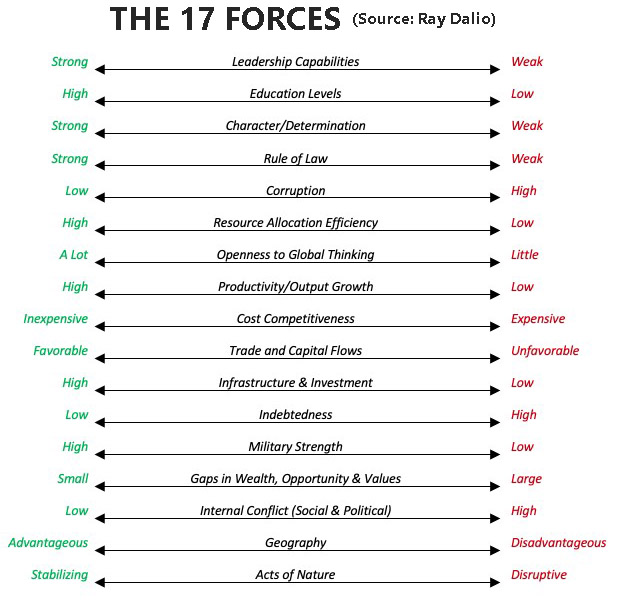 Credit ratings provide global investors with insight into the level of risk associated with a particular country. Credit rating agencies offer information about whether bond issuers can meet their future obligations. There are three major rating agencies: Standard & Poor's, Moody's, and Fitch

» More on Credit Ratings and Agencies

The Forex Market is open 24 hours a day from Monday to Friday. The best days to trade Forex are Tuesday, Wednesday, and Thursday. Overlaps offer high liquidity and wider volatility. The overlap between London and New York sessions offers the best opportunities for Forex trading from 12:00 to 14:00 GMT

It is highly recommended that you start trading Forex by opening a free demo account. A demo account can help you gain experience without any risk of losing your funds.